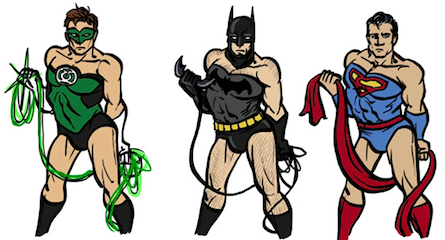 “If Male Superheroes Posed Like Wonder Woman.” [The Bleeding Cool, via Jezebel]

“An Open Letter to Fred Nile”, member of the Christian Democratic Party, who said the baby being expected by Federal Finance Minister Penny Wong and her partner, Sophie Allouache, has “human rights” and should not be brought up in a home with two mummies. [MamaMia]

The anti-child-model argument. And it’s a good one. [The Guardian]

The navel-gazing of the Gen Y writer. [Harvest Magazine]

The old Hollywood deception that was Rock Hudson. [The Hairpin]

The case for spoilers. I’ve been guilty of giving away the ending of movies and TV shows, saying things like “Oh yeah, and then it grows back” about Jessica’s broken hymen in her first sexual encounter—as a human or vampire—with Hoyt on True Blood, when I asked a friend which episode they were up to. Oh, you haven’t seen it? Whoops! [Jezebel]

And if The Help, the DSK case and Arnold Schwarzenegger’s love child have taught us anything, it’s that domestic workers are treated like shit. But hope may be on the horizon… [The Houston Chronicle]

As per Beyonce’s suggestion, a new word for feminism: equalism. Though one suggestion seems to have been submitted by Voltron… [Jezebel]

Where have all the good men gone? Not posting on Twitter thread #reasonstobeatyourgirlfriend and not being all “Post Gender Normative”, that’s for sure! [Tiger Beatdown, McSweeney’s]

Feminism and superheroes conference in Melbourne? So wish I was there! [The Age]

It’s (not) all about popular(ity) at Girl with a Satchel.

Rachel Hills on motivation and the fear of failure. And success! [Musings of an Inappropriate Woman]

Caroline Da Costa on why we need RU486 (the “abortion drug”). [MamaMia]

A step in the right direction to welcoming asylum seekers to Australia. [MamaMia]

Still with asylum seekers, along similar lines as my post this week. [The Punch]

“… Guilt ridden white first-world bloggers… love protests in Syria and Iran and elsewhere because they can cast those people, members of an alien culture, race, and religion, as the perfect representations of resistance while totally stripping them of the actual thorny reality of political rage. Theocratic preferences are stripped away; violent behaviour… is ignored; the re-instantiation of sexist Islamic doctrine within the structures of protest movements are conveniently elided. This is the way of all patronising attitudes from the overclass towards resistance: in order to preserve its romanticized view, it has to occlude the particular grievances and goals that make the protest meaningful in the first place….” [L’Hôte]

In the wake of the death of a toddler attacked by a pitbull, The Punch’s Anthony Sharwood decrees “pitbulls should all be killed. Every last one. It really is as simple as that.” Hmm, not sure I agree…

This profile on 2012 Republican presidential frontrunner Michele Bachmann makes me want to pray to the God she so staunchly believes in that there’s still a little bit of sense and belief in President Obama left in the U.S. [The New Yorker]