I wrote in defence of Eva Marie.

From Sir Mix-A-Lot to Taylor Swift to LEMONADE: on the origin of Becky. [Fusion]

Feministing hosts a roundtable on the topic.

Women-only train carriages: creating a safe space for women or not doing enough to curb the predatory behaviour of men? [Sheilas]

How Jane the Virgin deals with money. [Think Progress]

Why do women love Chris Evans so much? [Buzzfeed]

Ronan Farrow on why the media needs to hold Woody Allen accountable to allegations of child sex abuse against his daughter and Farrow’s sister. [THR]

Chelsea Handler writes in defence of being single. [Motto]

Justin Bieber and the surveillance of celebrities. [MTV]

I’d been looking forward to What’s Your Number for a while; Anna Faris is not someone you always see in a leading role in a mainstream, big box office rom com with Chris Evans; there’s a whole host of up-and-coming actors and established comedians (Joel McHale, Andy Samberg); and it deals with the issue of slut-shaming, the first in my memory to do so since Easy A, to name but a few reasons.

But if 20 lovers is the be all and end all in a woman’s quest to get married, then Faris’ character, Ally Darling, is up shit creek without a paddle.

When she discovers after reading a women’s magazine article that she’s slept with 19 men, thus significantly lowering her chances of getting married, she vows not to sleep with one more man until she’s sure he’s the one. One drunken bachelorette party later, and she’s slept with her ex-boss (played by McHale).

During her quest to seek out all her exes so she doesn’t have to go above 20, she meets her across-the-hall neighbour, Colin (Evans). And you can guess what happens next…

While I did enjoy the storyline, and I do love me some Faris and Evans, I was sorely disappointed in two aspects of the climax: that Ally clichély falls down when she runs out of her sister’s wedding to find Colin (see the Women Falling Down video for just how cliché this really is), and that after she’s slept with Colin she gets a phone call from one of her past lovers claiming they never slept together, just that she got really drunk, gave him a mediocre lapdance and handjob, and then passed out in the shower. So yay, right?! Ally’s back to 20 and a) will get married, and b) isn’t a whore!

I particularly liked it, though, when the guy Ally dumps Colin for—her high school sweetheart-turned-big time philanthropist, Jake—discovers she didn’t lose her virginity to him in high school, straying when he was out of town. He says, “Big deal. So you’ve only slept with two guys in your life.” I laughed out loud at this point. I’m not sure how old Ally is meant to be (considering she says she didn’t go to her high school reunion at the beginning of the movie, my guess is she’s around 30), but Jake—or any guy, for that matter—is deluded if they think a 30-year-old woman is going to remain celibate from her first sexual encounter in high school til she meets her husband later in life. Sure, there are some women who this is true for, but it’s the exception, not the norm.

Jake then proceeds to judge Ally on how many people she’s slept with, evening saying “Eww!”

On the other hand, Colin in the embodiment of a modern man. He couldn’t care less how many people Ally’s slept with, just as long as she sleeps with him, I suppose! But really, who does care? Why is your “number” so important?

In Defence of Rachel Berry. 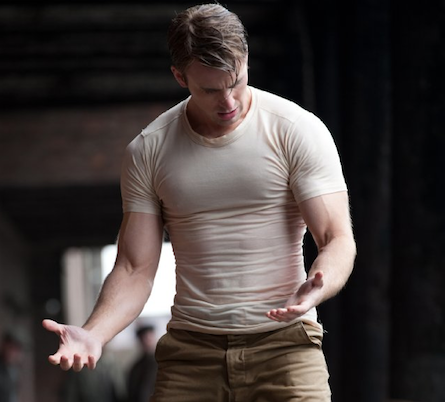 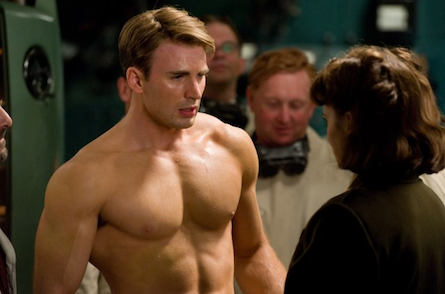 Captain America begins with the runty little Steve Rogers getting knocked back again and again for army enlistment because of his size. The CGI was done so well that a lot of people commented that they didn’t even know it was Chris Evans’ head seemingly Photoshopped onto a scrawny body.

It’s hard to rectify the pre-Captain America Rogers with the post-Stanley Tucci experiment Captain America. Evans looked so odd for the first half an hour or so, which is a far cry from the other films we’ve seen him in: Not Another Teen Movie and Fantastic Four, where he was predominantly shirtless and acting like an arrogant douchebag.

And as much as I preach that looks don’t matter, once I’d seen CGI-Chris Evans, I could not get that image out of my head!

It seems Peggy Carter had no problem forgetting Rogers’ humble beginnings, though. Carter had only a short interaction with Rogers before he became a muscle-bound superhero, and only began to show interest in him after the fact. Granted, five minutes of conversation, which Rogers admits is the longest amount of time he’s ever spoken to a woman for, isn’t enough to get to know anyone. But the look in Carter’s eyes was noticeably different after he emerged from the super-soldier machine (lust, awe), than before he went into it (pity).

If we want to send the message that women should be valued for more than just what they look like, shouldn’t we be sending the same one about men? Indeed, all people should be assessed based on what they offer the world and the people around them besides eye candy.

Sure, the reason Rogers was allowed to enter the military after the experiment is because his physical capabilities were enhanced. Fair’s fair. But it seems Carter fell in love with the man behind the Captain America mask; the exact same man Rogers was before the experiment. The man Dr. Erskine chose for the experiment because of these traits. The baby blue eyes and the muscles just enhanced that.

I’m not going to pretend that physical attraction doesn’t matter; it does. But psychological attraction is the connection that will stand the test of time.

Anyone will tell you that the archetype of the comic book nerd identifies with superheroes because they’re usually the underdog. People walk all over them, not recognising them for who they are until they get a magic ring, or bitten by a spider, or made into a super-human in an experiment and can show the world what they’re made of.

But why do they have to undergo a physical transformation for these traits to be acknowledged? If comic book heroes teach us anything, it’s that courage comes from within. Captain America certainly teaches us that. If only Hollywood adopted this strategy, too.

Will Boys Be Boys When it Comes to Objectifying Women?

I haven’t seen Iron Man. Or Iron Man 2. Or The Incredible Hulk. I hated Thor. I’m not looking forward to The Avengers, other than the fact it has the Chris’s (Evans and Hemsworth) in it.

So I went into Captain America with a little trepidation, but from the previews, I liked what I saw: minimal alien action. Hypereal World War II setting. Chris Evans.

And I wasn’t disappointed.

It was easy to get behind Evans (or, as I joked after the movie, for him to get behind me!) as the good-hearted and brave protagonist and title character.

And it was funny, too: my comic-book-geek friend Eddie laughed intermittently at jokes that only he got (we were in the Director’s Suite with about three other people). There was an enjoyable fondue shtick that we laughed at for about five minutes, missing the ensuing dialogue.

I quite enjoyed the imagery. I love mid-20th century Americana, and Captain America didn’t disappoint, with his humble beginnings as a cotton wool cartoon hero who performed for the troops rather than being one.

Ultimately, it was a no-frills story about good vs. evil. Who magazine’s review said that it “isn’t out to dig deep”. Perhaps not consciously, but I did notice some underlying messages when it came to male body image, which I’ll be blogging about this week. Without giving the ending away, I was thoroughly surprised by it, which perfectly sets up the interlude to 2012’s The Avengers which, dare I say, made me a tiny bit excited for it. You know, besides the Chris factor.

*It has come to my attention that I give away too much in my movie reviews, so the asterisk will now serve as a blanket *spoiler alert* from now on.