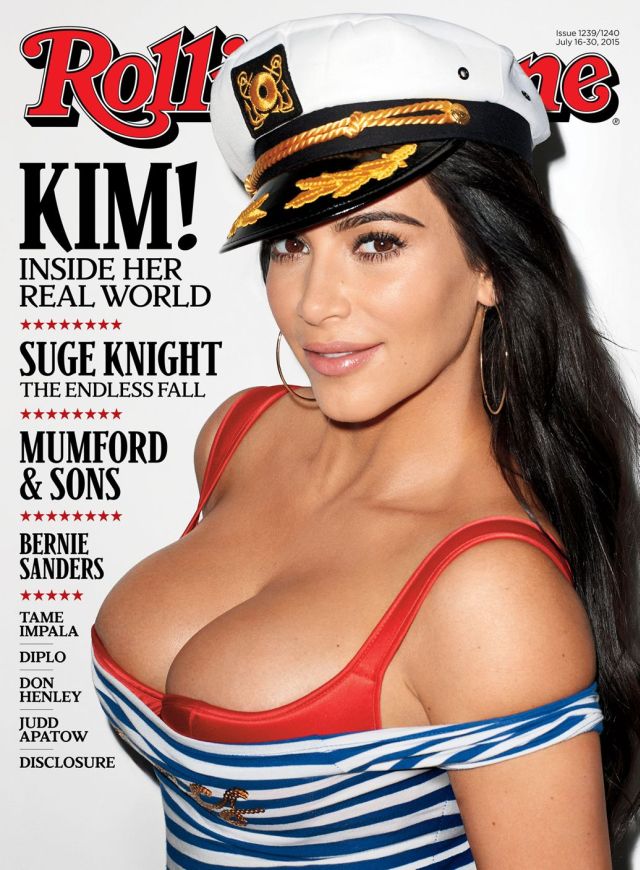 “… [The Kardashians] also exhibit an attitude toward their bodies that can only be called revolutionary. Women have long asked for fair vagina representation in media, for their vaginas not only to be sexual objects but to smell and bleed and pop out babies, and on their show, Kardashian vaginas do all that and more, which is very different than other pop-culture vaginas.”

Speaking of Kim, is she becoming more political? [Fusion]

And Kanye West could actually be the best president the United States has ever seen. [The Guardian]

How SlutWalk Melbourne has evolved in the past four years. [Spook Magazine]

HIV on HTGAWM. [This Ain’t Livin’]

“I Feel Bad About My Nose.” [Broadly]

“When asked if racism existed outside of Compton by SPIN magazine in 1990, Eazy-E replied, ‘The black police in Compton are worse than the white police. Chuck D gets involved in all that black stuff, we don’t. Fuck that black power shit; we don’t give a fuck. Free South Africa; we don’t give a fuck…We’re not into politics at all.’” [Talking Points Memo]

Move over #DivasRevolution: WWE is in the midst of a black revolution and it’s been right under our noses this whole time. [Uproxx]

Disability advocacy campaigns need to be inclusive of the people they’re claiming to help, not pitying of them. [Junkee]

Is Justin Bieber’s new song a pro-consent anthem? [The Cut]

Women can be pedophiles, too. [Broadly]

Last week I posted a link to a study by Seat Smart about the most unintelligent songs of the past decade in which the genres of pop and R’n’B/rap/hip hop featured heavily.

Word length and the amount of syllables therein were factors in pushing a song over the edge from unintelligence to intelligence. From the study:

“Country music is full of words like Hallelujah, cigarettes, hillbilly, and tacklebox. Add to that long place names like Cincinnati, Louisville, Mississippi, and Louisiana, and [c]ountry has a serious advantage over the competition.”

Country music coming out on top as the most intelligent genre is laughable; this is the inherently sexist genre that brought you such gems as “Thank God I’m a Country Girl” and Taylor Swift before she found feminism. Just because country originated in parts of America with really long names don’t mean jack. (I tried my hand at some country-esque parlance there.)

Though you wouldn’t think it from the flashy and oftentimes nonsensical rap styles of Pit Bull and Snoop Dogg phoning it in on tracks like Katy Perry’s “California Gurls”, rap and hip hop were spawned in some of the poorest and most downtrodden parts of major cities where their primarily black and Hispanic residents were oppressed and discriminated against and where drugs and crime were rampant. In his younger days, Tupac Shakur rapped about police brutality (“Trapped”, “Changes”), slut shaming, sexual assault and STDs (“Brenda’s Got a Baby”, “Keep Ya Head Up”, “Baby Don’t Cry”), and drugs (“Changes”), while N.W.A. produced songs with similar content.

As is evident in the popular music that the study chose to… erm… study, the rap that makes it to the top 40 charts isn’t necessarily an accurate depiction of the genre as a whole. Take, for example, Kendrick Lamar. I’m not super familiar with his work but I do know that the most commercial success he’s seen came with his recent cameo in Taylor Swift’s (of country music origins) video for “Bad Blood”. And while we all have an opinion on Kanye West, he raps intelligently—although this study would seek to disprove that—about fame, money, racism. (His inclusion on Katy Perry’s “E.T”, making it one of the past decade’s smartest songs, while Perry’s “Wide Awake” with no obligatory rap interlude makes it the 10th dumbest song of the decade should be indicative of rap’s—or at least Kanye’s—value.) This is not to mention the copious amounts of underground and unreleased rap out there.

When it comes to women, Mariah Carey (“We Belong Together” is finally getting its due as one of Mariah’s more artful arrangements) and Nicki Minaj (again, her unreleased stuff is far more sophisticated than “Anaconda” and “Starships”) are topping the intelligence scales while Beyonce makes an appearance in both intelligent and unintelligent lists. That the biggest and best artist in the world today could be described using the word “unintelligent” is a crime. It just goes to show that word length alone doesn’t demonstrate the myriad aspects that go into creating music.

It’s also interesting that many of the artists who rank high in intelligence are appropriating the music of other cultures, ie. Eminem and Macklemore. (My mother recently said she thought Eminem was the best rapper, despite the high rotation of rappers of colour on my and my sister’s CD players in our youth.) On a related note, Iggy Azalea is nowhere to be found in this study.

Sure, songs like “California Gurls” and “Tik Tok” may indicate our lowering intelligence as a culture (though, having said that, these are two of my favourite songs to get down on the dancefloor to, so do with that what you will), but artists like Lady Gaga, Beyonce and Taylor Swift (despite what the study says!) who are changing the game would suggest otherwise.

What do you think? Do you agree with the study’s assertions or would you counter them like I have?

[The Guardian] Taylor Swift: “Sexy? Not on My Radar.”