Victoria’s Secret and Photoshop: first you see it, then you don’t. [Jezebel]

If you’re an anti-feminist woman maybe you should be evicted from the house that feminism built. [Dammit Janet]

The case against freedom of opinion. [The Conversation]

Why Beyonce is a phony. [TheVine]

“Top 10 Most Obvious Halloween Costumes”, with a special mention to option number two, which inevitably has an outing every year. But here’s an idea: how about combining Presidential politics and dogs in costumes to create Mitt Romney strapped into a cage on top of your canine? Already been done by the marvelous minds that enter the annual Tomkins Square Park Halloween dog parade, but nevermind: I’m still dressing my dog up as this! [TheVine,  HuffPo]

Why is the “colour” of Rihanna’s fragrance—called Nude—so white? [Sociological Images]

Surprise, surprise, Taylor Swift is not a feminist:

“I don’t really think about things as guys versus girls. I never have. I was raised by parents who brought me up to think if you work as hard as guys, you can go far in life.”

As the article points out, not only does she not know what feminism is, but her music is purely about guys versus girls and how poor little innocent Taylor had her heart broken by a big bad boy. You know, when she’s not slut-shaming and perpetuating a heteronormative Romeo-chases-Juliet-in-a-castle ideal of relationships. [Jezebel]

Who knew Eva Longoria is more than just a “boring pretty person with bouncy hair”? In fact, she’s chair of the committee to re-elect Barack Obama and retweeted a controversial statement related to voting for Mitt Romney. You go, girl! [Jezebel]

“What It’s Really Like to Wear a Hijab.” [Daily Life]

While the mainstream media is not always the most tasteful industry, its coverage of Jill Meagher’s disappearance was invaluable in helping catch her killer. [MamaMia]

And here’s an amusing take on the sexist comments thrown women’s way after the Jill Meagher tragedy. I’ve been experiencing some of these “restrictions” myself since then, preached to me by well-intentioned but misguided friends, which I’ll be writing more about next week. [Feminaust]

Why fur is back in fashion. [Jezebel]

The perils of getting a hair cut as a black woman. [Jezebel]

Two of my favourite writers and unofficial mentors, I guess you could say, are in the midst of writing books. Rachel Hills and Sarah Ayoub-Christie detail their struggles with the process. Keep ya heads up, girls! [Musings of an Inappropriate Woman, Chasing Aphrodite]

“Reverse Photoshopping” a “too thin” Karlie Kloss isn’t any better than Photoshopping away cellulite or blemishes. [Daily Life]

Why are all the feminists these days funny? Um, because we wised up to the fact that our ideals are better digested by the mainstream through less-threatening humour than shoving it down unwilling throats. Though we still do a lot of that!

Incorporating part of her speech, Ford elaborates on Alan Jones’ misogynistic comments about the Prime Minister and women in general. [Daily Life] 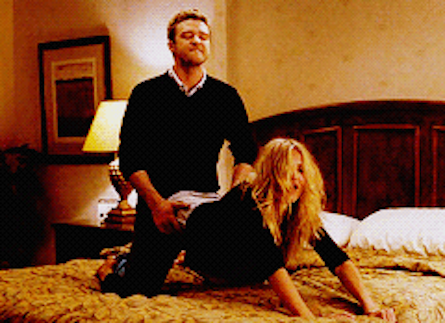 “The Case for Dry Humping: Why Being Prude is a Feminist Statement.” [HuffPo]

Alone time is my siren call. Here, Jezebel’s Social Minefield tells you how to get more “me time” without offended those who want to have “we time” with you.

One woman goes mirror-free for a year. [Jezebel]

Lady Gaga’s run out of people to plagiarise, so she’s turned to herself for inspiration in her latest video for “Yoü & I”. [Fashionista]

Camilla Peffer on Beyonce as the anti-feminist. [Girls Are Made From Pepsi]

Is there a need for women to have their periods?:

“… I do want to raise the question that while we do the work of destigmatising menstruation and teach young girls to be proud and excited about their menarche don’t we also have a responsibility to question its necessity? We tell women they don’t have to have sex to have children, that breast cancer can be beaten, that they can have their tubes tied and then re-connected and their faces lifted and de-wrinkled. We live in a modern world with modern solutions, isn’t it time we started seriously thinking and talking about the need to bleed?” [Feminaust] 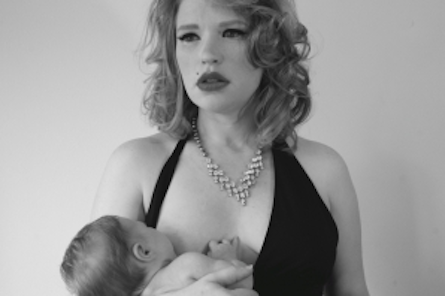 Anne Hathaway’s new effort, One Day, has a “bleak worldview of co-dependence where men need women to improve them, and women need to improve themselves to deserve men’s notice and achieve their purpose,” with The Film Stage dubbing it “the most toxic romance of the year”.

Also at The Film Stage, a breakdown of Katherine Heigl’s stereotype-reinforcing rom-coms, from the career-making Knocked Up, which she subsequently dissed for being sexist, to the just-as-sexist Killers and Life as We Know It.

Here’s an extended version of Erica Bartle’s debut piece for Sunday Life. While I don’t necessarily agree with her sentiments on faith most of the time, this is a great read. Better than the published piece, dare I say? [Girl with a Satchel]

Is it “time for an abortion pride movement”?:

“… Women should not merely have the right to end unwanted pregnancies, they should have the right to be proud of having done so. Surely, there is enough suffering in this world already without adding infants with Tay-Sachs disease and Lesch-Nyhan syndrome to the mix. Women who step up to the ethical plate and have the strength to say, ‘This is the wrong time,’ or ‘This is the wrong fetus,’ should hold their heads high in the streets.” [Opposing Views]

Oh, the hilarity of Photoshop on this Glee/Vogue/Fashion’s Night Out advertisement. [Styleite]

It’s not just women who get the short end of the stick when it comes to Disney films: “Sexism, Strength & Dominance—Masculinity in Disney Films.” [FBomb]

The awesomeness that is Adam Lambert. [Autostraddle]

One from the vault: Buffy’s Willow Rosenberg destroys the world when her lesbian love is killed, calling into question the show’s support of the LGBT community. [Salon]

A mother’s perspective on the dysfunctional Twilight-saga relationship between Edward and Bella. [Persephone Magazine]

The politics of the SlutWalk. [New York Times]

Five of The Simpsons’ best recipes, including 64 slices of American cheese and Vaseline toast! [Warming Glow]

Mia Freedman really is a brand unto herself. We all know she revolutionised the magazine world at age 25 as editor of Cosmopolitan. Her blog, MamaMia, really came into its own during last year’s federal election, offering a different take on politics for modern women. And she’s now a three-time published author with her own television show on SkyNews!

Of course she credits her husband, Jason, her kids, friends, family and MamaMia team with supporting her and helping run her media juggernaut, all of whom she writes about—sometimes anonymously, but oftentimes not—in her latest memoir-cum-“long, wonderful dinner-party conversation”, Mia Culpa: Confessions from the Watercooler of Life.

A lot of the material that makes up Mia Culpa I’ve read before, I will admit, in Freedman’s Sunday Life column, her blog, and various other publications she makes appearances in. But I’ve been known to revisit favourite blog posts and articles before, so it was very enjoyable to read Freedman’s musings on everything from sex to SNAGS (p. 64–67) to showering (p. 290) to breastfeeding (p. 175–179) to interior design (p. 129) to social stamina (read: non-existent when you have a young family, p. 131–136) to Christmas (p. 148–152) to how many children you want/have (p. 71–75) to the hypocrisy of being a certain-meat eater (“I’ve never eaten things like duck or rabbit or deer because I relate to those animals in a way I don’t relate to chickens—perhaps because many of them were storybook characters. Bambi, anyone?” [p. 145]. Guilty as charged) to Disney princesses (p. 180) to The Secret (p. 301).

Some of my favourite parts existed in the first chapter and were a nice way to begin the book. In it, Freedman writes about grooming standards in long-term relationships (p. 4–12), choosing between your ass or your face as you grow older (p. 13–16), skinny-shaming VS. fat-shaming (p. 16–23) and the pre-requisite rant on unrealistic portrayal of women VS. men in the media (p. 23–32). But when she puts it like this, it’s hard not to see Freedman’s point:

“Pretend the world was full of pictures of naked men. On billboards and the sides of buses, in magazines and ads for beer, cars and deodorant. Imagine there were penises everywhere you turned and you couldn’t escape seeing them every day.

“And all the images of nude men were fake. Every male model and celebrity had had penile enlargement surgery, and afterwards, his penis had been extensively photoshopped to make it look even bigger. So now, all the penises you saw in the media every day were knee-length and as thick as an arm.

“One day, next to a magazine article about a celebrity with a foot-long penis, you read the headline: ‘This is what a 43-year-old penis looks like’. The caption underneath read: ‘Asked for the secret to his long schlong, former male model Markus Schenkenberg insists he was just born that way. “I wear cotton boxer shorts and I exfoliate in the shower,” he shrugs. “That’s all I do.”’

“After reading a hundred stories like that and being bombarded by 10,000 images of men with surgically altered and digitally enhanced penises, do you think you might look down at your natural, un-photoshopped trouser snake and feel a little… deflated? Inadequate? Insecure? Angry?”

There’s also some of Freedman’s fascinating thoughts on being a “try-sexual” as per Katy Perry’s “I Kissed a Girl” (p. 241–244), which has been written about extensively on sites like MamaMia and Rachel Hills, and tattoos (more on that to come later today).

You don’t have to be a Freedman fan-girl to enjoy this book; I would recommend it to anyone who happens to be of the female gender, and even those who don’t happen to be but are just looking for some enlightenment on the species.

“Who the Bloody Hell Are We?”: The Sentimental Bloke at the Wheeler Centre.

[MamaMia] Cindy Crawford is Naked in Allure Magazine. And 43.

[MamaMia] I Kissed a Girl. Because I Had Something to Sell.

[MamaMia] Kissing a Woman Does Not a Lesbian Make.

[Rachel Hills] The Rise of the Guy-On-Guy Kiss.

In the vein of “What’s the use of being Supergirl if I can’t even get a date?”, comes the perils of being a 1940s boy in the dating world.

Feminist commentator Greta Christina muses on the appeal of Don Draper and the bad boy fantasy:

“Why are so many women hot for Don Draper? The lying, philandering, self-absorbed, work-obsessed, emotionally-warped, goes-through-mistresses-like-cigarettes, sexist prick of a lead character, Don Draper?” It’s because he “isn’t a standard bad boy… And look at his taste in women. Every woman Don cheats on his wife with is intelligent, independent, unconventional, and in some way defiant of gender roles… (In fact, I’m wondering now if part of the Don Draper fantasy has to do with wanting to be one of the strong, edgy, fascinating women he gets the hots for.)”

“When did men in America go from being masculine steak-eating, plaid shirt wearing, Old Spice smelling, cigar smoking cowboys who like football, hunting and Clint Eastwood movies to skinny jean wearing, satchel carrying, pierced ear heterosexuals who like chick flicks, The View, and Bath & Bodyworks? The American man is an endangered species due in large part to the over-feminisation of society.” That’s right, blame it on the feminists! 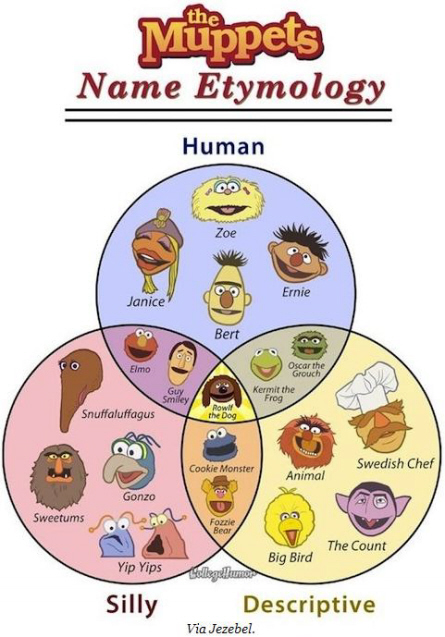 Brush up on your Muppet who’s who with this Muppet Name Etymology chart.

Your permission slip from the universe allows you to walk out of movies that suck, quit your job, and fail, amongst many others.

Check out Nubby Twiglet’s quirky photo dairy of her trip to L.A. and Disneyland.

Anyone who watched The City or The Hills will remember People’s Revolution boss and mentor to Lauren and Whitney, Kelly Cutrone, and her hilariously truthful insights. Now, you can brush up on all your favourite Kelly quotes here. My favourites? “I don’t need to defend my company against a girl who wears pink!” and “You know where nice people end up? On welfare”, the latter of which I have used as a Facebook status!