Further to yesterday’s post, “Is Robin Thicke the Male Equivalent of the Crazy Ex-Girlfriend?”:

“Pathetically wounded, his ‘clean’ (married, romantic) image tarnished by ‘dirty” rumors of infidelity, more than a little deluded and dangerous in his insistence that ‘no’ always means ‘maybe,’ that the lines between him and the women he wants are always ‘blurred’ no matter how clear and firm they seem to anyone else, he’s perfectly suited for the Celebrity Meltdown slot we usually reserve for women. We hate Thicke the way we hate girls: Based on vibe, on rumor, on what he feels and whether we want him to feel it. Thicke may go down in history as the first man ever to be stereotyped as a crazy ex-girlfriend.” [Global Comment]

Orange is the New Black‘s second season dropped on Netflix last weekend, and Sady Doyle explains that it’s not just a “knitting circle” show for women:

“I mean, there is a knitting circle. But they have an alarming tendency to shiv people.” [In These Times]

What a difference 40 years makes: Seventeen magazine then and now. [Shameless Magazine]

“The old adage that sex sells meant a lot when you literally had to buy into an artist or performer. You couldn’t read Madonna’s Sex book without purchasing it, or watch Deep Throat without going to the cinema. True, music videos have always been free at the point of access, but they once acted as adverts for a purchasable product; now people can watch ‘Wrecking Ball’ as many times as they want, with no interest in the Miley album itself. They can tweet about what she means for feminism till they’re blue in the face, but with no real interest in the end project, there’s no guarantee that all publicity is good publicity.”

I would argue that Miley’s selling a different kind of sex than your Britneys and even Madonnas once did; she’s portraying a crazier, more aggressive and perhaps more authentic sexuality than we’ve seen amongst female pop stars in quite awhile, barring Rihanna and her IDGAF attitude. [Vice]

Slenderman shows that “adolescent intensity, obsession, fantasy, derangement, illness and yes, sometimes violence, are not the exclusive domain of boys.” [The New Republic]

Stop using “I have a boyfriend” to deflect unwanted romantic attention. [Daily Life]

And if you’re after even more linkage, check out The Conversationalist‘s hosting of the 73rd Down Under Feminist Carnival, featuring links from yours truly and many other feminist musings. 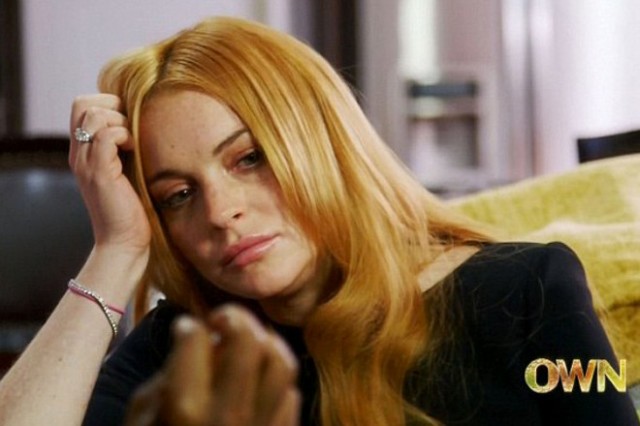 I wrote about Oprah’s docuseries being bad for Lindsay Lohan’s career. At least before her lacklustre reputation could be boiled down to “Rumours”. Now, despite her addiction and various other mental and physical issues, we’ve see just how unprofessional she really is. [Junkee]

“The idea of the lurking monster is no doubt a useful myth, one we can use to defuse any fear of the women we love being hurt, without the need to examine ourselves or our male-dominated society. It is also an excuse to implement a set of rules on women on ‘how not to get raped’, which is a strange cocktail of naiveté and cynicism. It is naïve because it views rapists as a monolithic group of thigh-rubbing predators with a checklist rather than the bloke you just passed in the office, pub or gym, cynical because these rules allow us to classify victims. If the victim was wearing x or drinking y well then of course the monster is going to attack—didn’t she read the rules? I have often come up against people on this point who claim that they’re just being ‘realistic’. While it may come from a place of concern, if we’re being realistic we need to look at how and where rape and violence actually occur, and how troubling it is that we use a nebulous term like ‘reality’ to condone the imposition of dress codes, acceptable behaviours, and living spaces on women to avoid a mythical rape-monster. Okay, this rape-monster did exist in the form of Adrian Bayley, but no amount of adherence to these ill-conceived rules could have stopped him from raping somebody that night.” [White Ribbon Australia]

Can you be a feminist and…? [Another Angry Woman]

Equal opportunity objectification. (I also wrote about the phenomenon upon the release of Magic Mike in 2012.) [Jezebel]

The garish-yet-elegant art of drag… and wrestling! [WFAE NPR]

On TV, troubled women are better off dead than being helped. [The New Republic]

Still with TV, rape in the golden age of it. Notice how most of these shows centre around men while raped women are in the periphery. [Washington Post]

And further to this, isn’t it about time straight, white men on TV stopped being represented above all other possibilities? [SBS News]

The science of promiscuity. [The Wheeler Centre]