A women in refrigerators supercut.

What relevance should a sex workers’ occupation have to her sexual assault? Nothing, but unfortunately it’s everything. [Daily Life]

Dzenana Vucic follows my train of thought about the public outrage against Jennifer Lawrence’s violation of privacy VS. previous nude celebrity leaks. [Junkee]

The second- VS. third-wave feminism of Marge and Lisa Simpson. [Bitch Magazine]

Janet Mock on Beyoncé and her feminist awakening. [Janet Mock]

Why is a woman’s decision to undergo sterilisation to continue having a child-free life met with skepticism and derision? [Daily Life]

The cognitive dissonance of Joan Rivers’ life and death. [Buzzfeed]

In the wake of Ray Rice’s dumping from the NFL and the Baltimore Ravens for beating his then-fiance, a refresher course on all the famous men we’ve forgiven for their abuse because they do stuff we like. [Dame Magazine]

“You made me hit you in the face. Now everyone is going to know.” (*trigger warning*) [Guernica]

Kim Kardashian has figured out a way to make bank for doing “women’s work”. [Brooklyn Magazine]

The Brittany Murphy Story and the rise of the celebsploitation movie. [Daily Dot]

I wrote about the power of work/life balance in Charmed. [Bitch Flicks]

Yet another piece in defence of Sex & the City. [Daily Life]

The unsexy reality of centrefolds: behind the scenes of Playboy (NSFW). [Beautiful Decay]

On-screen abortion is portrayed as more dangerous than it actually is. [Bitch] 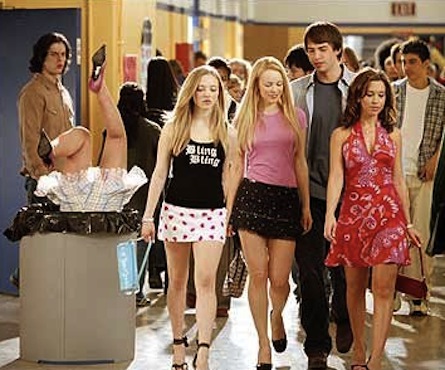 From “In Defense of Women Behaving Badly, Part 1” by Camilla Peffer on Girls Are Made From Pepsi:

“… Women like Courtney Love who gyrated on stage in baby-doll dresses and smeared lipstick, and responded to the adoration of idolising fans with a growling retort—‘You don’t even fucking know me’… As a woman, I was expected to act a certain way, be a certain ‘thing’. To smile, all the fucking time, to be cheerful, to hold my tongue, to flirt with customers if I wanted more tips, to look pretty even if I felt like complete crap, to take criticism lying down.

“As I’ve gotten a bit older, and I like to think a bit wiser, I’ve started to realise that it’s okay to be imperfect. To have fights, to be called a bitch, to be a goddamned rabble-rouser if you bloody well feel like it. To not fit this mould of sweetness and light, of delicate austerity and soft-spokeness. I doubt the Women’s Suffrage would have achieved the right to vote if they’d stuck to their pleases and thank yous.

“When someone tells me that I’m nice, or sweet, I do find it quite superficial. People tend to have this illusion of depressed women—that we’re pretty when we cry, that there’s beauty in the breakdown. Anxiety and depression can wreak havoc on your personality, render your actions and thoughts inhumane, violent, unprofessional, uncouth, anti-social and un-feminine… However, I’m also strong. I can channel my anger into productive energy, and I know when to speak up if I feel I’m being wronged.”

Elsewhere: [Girls Are Made From Pepsi] In Defense of Women Behaving Badly, Part 1.