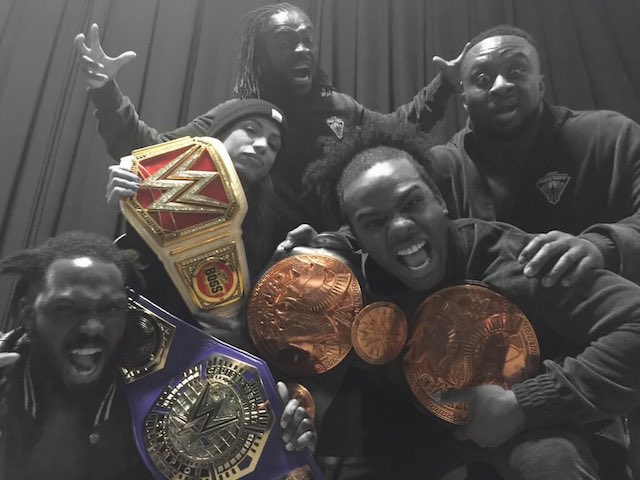 I’ve started writing for Paste Wrestling about quotas being the only way World Wrestling Entertainment will diversify, that supporting WWE financially may mean supporting the Trump administration, why they need a women’s Royal Rumble match and the inequality that still remains in women’s wrestling.

And I attended Donald Trump’s inauguration and the Women’s March in Washington D.C. and wrote about it for SBS Life.

I’m at Writers Bloc musing about the guilt that comes when the work isn’t and the obligatory leaving New York essay.

How Carrie Fisher became the face of the Women’s March. [Vanity Fair]

Women filmgoers are largely responsible for Passengers flopping. But has Hollywood stopped to realised why we’re sick of rapey storylines and how we express satisfaction with our money? [Bibliodaze]

Beyonce, Kim, Taylor and Trump: how celebrity changed in 2016. [The Ringer]

Patriots Day is the first movie of Trump’s America:

“Such films are perfect vehicles for a Trumpian understanding of the world, one in which there are clear winners and clear losers, where environmental concerns disappear and the virility of the male ego (and, by extension, the American self-image) matters above all else. Where root causes of conflict go unaddressed; where nuance and reading and knowledge are denigrated as the provenance of intellectual sissy fools. These films ‘flatten journalism into a GIF,’ Nicholson argues. ‘They frighten me.'” [Buzzfeed]

Finding solace in the Final Girl as an abuse survivor. [Birth Movies Death]

How My Favorite Murder grants courage to survivors of violence. [Buzzfeed]

2016, it’s fair to say, was a pretty shit year for humanity in general. For me personally, though, it was pretty good. I’ve published the most freelance work I ever have, and I’m writing this from New York City, where I’ve been seeing out the apocalypse (the Mayans were wrong: 2016 is the end of their calendar and, thus, the world) for the past two months. Here are some of my favourite things I’ve published this year.

“Beyoncé Makes Us Want to Be Better People” & “The Kardashians Are Better Than You”, The Vocal.

Some of the most fun I’ve had writing was for The Vocal and I think these were two of my best pieces. I love writing about controversial issues and controversial women, and these two subjects certainly tick those boxes.

Similarly, what’s more controversial than comparing perhaps the most reviled woman in contemporary culture with the iconic, though equally disdained, Marilyn Monroe?

And in the wrestling world, who is more controversial than Total Divas star Eva Marie? I wrote in defence of her for Calling Spots magazine.

“Whorephobia & Misogyny in Wrestling: Still Real to Me, Dammit”, Harlot.

Short-lived feminist site Harlot let me write about what a travesty it was that woman wrestler Chyna wasn’t inducted into the World Wrestling Entertainment Hall of Fame. She died a month later.

Writing for SBS’s now-shuttered women’s sports site Zela was one of the defining moments in my career. A writer and editor I’ve long admired (but who I thought didn’t even know I existed!) recommended me to Zela editor Danielle Warby to cover the women’s wrestling renaissance. My favourite piece was an overview of the year in women’s wrestling up to that point in one of my last articles for the site.

“Nia Jax: Not Like Most Girls”, “Smack Talker! Daniel Bryan’s Tiresome Vocal Misogyny” &  “A Woman’s Place Should Be in the White House—And in the Cell”, Intergender World Champs.

With Zela and Harlot shutting down, I was without a place to write about women’s wrestling for a time. Then along came Intergender World Champs, for which I’ve written an assortment of things.

I’d long been thinking about “women’s empowerment” and what it even means, and I got to write about it for my first piece for Daily Life, an outlet I’d been trying to crack for years.

“Trading in the Beauty Economy”, feminartsy.

I’d been pushing words around in this piece for ages and feminartsy allowed me to publish it.

My first piece for Archer was a look at the rape allegations against James Deen and what mainstream industries can learn from porn’s response to them.

“This is the Most Devastating & Political Season of Orange is the New Black Yet”, Junkee.

Getting paid to write about things you enjoy doing is a pretty good gig.

“Women of The People VS. OJ Simpson“, The Big Smoke.

Though not my last published piece for 2016, what better way to cap off a tumultuous year than by writing about volunteering for Hillary Clinton?! 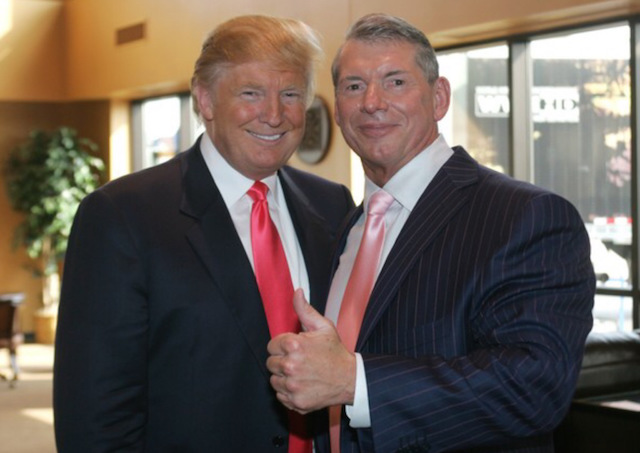 Remember that time Donald Trump “bought” World Wrestling Entertainment? Well I wrote about how politics and wrestling are more intersected than meets the eye, especially when it comes to a woman’s place in them. [Intergender World Champs]

I also wrote about the rise of female characters with mental illness on TV. [Bitch Flicks]

People magazine put President-Elect Trump—the man who only a few weeks ago was accused of sexually assaulting one of its writers—on its cover because “it reports from inside the assholes of celebrities.” [Buzzfeed]

Why she should acknowledge the #WomenWhoWork to keep her life functioning the way she portrays it to. [The Cut]

Like the Chinese nanny who taught her daughter Mandarin.

Arabella wanted to have a pre-bedtime #ChineseNewYear party this past Sunday evening. She got all dressed up and performed songs and poems for Jared, Joseph and me. It was pretty adorable 🐒#yearofthemonkey #happyChineseNewYear

“How Trump Made Hate Intersectional”:

“It’s harder to talk about grabbing women by the pussy if there’s also a woman in the circle, and that in turn makes it harder to blindly assault. It’s harder to casually say nigger when there’s a black person in the circle, and that makes it harder to beat a black kid senseless without fear of repercussion. It’s harder to say faggot when someone queer is in the room, which lessens the ability to casually bully a gay person to the point where they take their own life. Yes, there’s hate spread throughout this country, but it stems from the sickness that involves stopping at nothing to keep spaces fully white, allowing white people to continue with behaviour that is no longer universally accepted in the real world.” [Daily Intelligencer]

What does the Liberal White Feminist Thinkpiece accomplish? [Medium]

Talk about a “rigged” election: here’s what it took to beat Hillary Clinton. [The Guardian]

“Identity politics” was not to blame for Hillary’s loss. [The Cut]

What it’s like to be an Asian background actor. [Vox]

I was on my very first panel at the Digital Writers’ Festival, talking about what it means to be a writer online away from Australia.

I wrote about volunteering for Hillary Clinton. [Daily Life]

What if New York City was named for its women? [New Yorker]

The black history of the nameplate necklace. [Fusion]

Two women wrestled for the first time inside Hell in a Cell so sexism in wrestling is over now, right? [Fight Booth]

World Wrestling Entertainment has an ageism problem, but it only affects women, of course. [Wrestling Sexism]

“In WWE, women don’t really have the option to be friends. There’s no benefit to a friendship because belts can only be held by an individual, and everyone is competing for the same titles. There’s quite a sad parallel here to the real world. Women often feel that they are in competition with other women for jobs, relationships and resources that seem scarce. Has a new woman starting at your work ever filled you with irrational jealousy, even if she seems perfectly nice? Ever wonder why?” [Intergender World Champs]

In defence of Melania Trump. And if Donald Trump is as dangerous as we believe him to be, then she certainly needs it. [Melville House]

This election has taught us that “expanding roles and opportunities for women cannot usher in full gender equality unless men change.” [NYTimes] 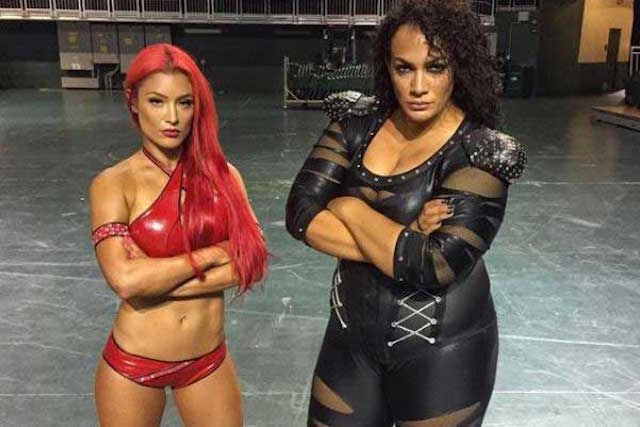 I wrote about the damaging notions of “most girls” and “real women” in wrestling for a new intersectional wrestling site. [Intergender World Champs]

I also wrote about blogging nostalgia and why I no longer identify as a blogger. [Writers Bloc]

I’m at F is for Feminism writing about being child-free by choice.

And my latest piece for SBS is on white writers telling black stories.

The catch-22 women who experience depression from taking the pill face when they have no other options. [Daily Life]

“I’m a woman wrestler and a survivor of intimate partner violence.” [Motto]

The frightening similarities between Election and the current U.S. presidential race. [The Cut]

How women’s magazines repositioned themselves to be major players in the political press. [Vox]

Couples with Down syndrome don’t need to be sterilised, they need to be supported. [Daily Life]

Birth of a Nation gives its women characters the short straw. [Vulture]

“Pussygate” was the final nail in Donald Trump’s presidential coffin, and women voters will make him pay for it at the ballot box. [NYTimes]

Trump’s abhorrent misogyny has brought to light the Republican party’s view of women as extensions of the men who own them. [The Cut]